Happy day after Easter!!
I went back home to visit my folks and found the cutest yarn shop! Since I've only been obsessed with knitting for about 6 months - I hadn't ever noticed it before - but there it was - not far from my parent's house.

The Kraemer yarn shop in Nazareth PA is awesome! If you ever find yourself in Eastern PA with nothing to do - I highly recommend checking it out! They make their own yarn and the wool mill is around back! There was literally wool in the air and hanging from the fence outside - I love it! I think the part I liked the best was that they named their wool after the local towns in the area - Naturally Nazareth, Tatamy Tweed etc. I bought a sampling of everything of course.

I took some pictures too... 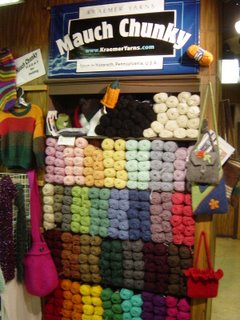 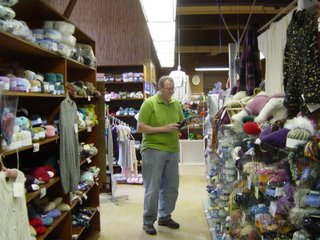 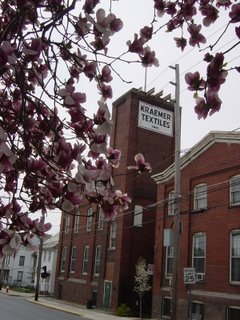 Oh and I spoke to the owner - and she will be selling her wool at the Sheep and Wool festival! So - if you see something you like - you will have a chance to get some.

And miracle of miracles - I brought my husband with me to the yarn store (dragged is probably more like it) and he actually had fun picking out yarn too!! I now have two projects that he wants me to make for him and he is already nagging me about starting his "funky socks" and wool felted hat. He now officially is wool crazy. He vows he won't ever knit himself - but he says he will go along with me to the yarn store! hehehehehe (evil laugh)


It was also my grandmother's 90th birthday. My mom's side of the family definitely has good genes! She's still energetic and gets around very well. Her mother lived well into her 90s too. Art, Mary and Mary Rose were over as was my mom's cousin Jerry. We ate well and had a wonderful time! 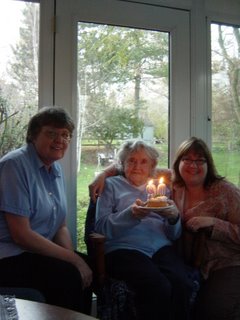 As for my knitting projects - I finished the washcloth and also finished two paris of booties for my friend Aimee's new baby Kaylin. She is so tiny!! The "newborn" booties I got her were enormous on her tiny feet! She was just adorable and Brendan was a great big brother and very gentle with her. We had a little easter egg hunt for Brendan too and he enjoyed eating the chocolate more than finding the eggs! 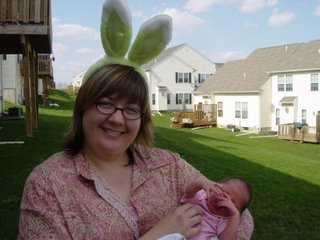 Since John is now a yarn whore like me - he made me start his new wool hat - even though it's way too hot for wool hats right now! I am a bit nervous about how it will turn out. I've never done a felted hat before - so I'm not quite sure how big it's supposed to before felting. He picked out two shades of orange and a bluish gray. NOT the colors I would use - but it's his hat!
Posted by Jody at 8:24 AM