I went back to the Sheep and Wool on Sunday and took a entrelac class in the morning. Ann Feitelson was the instructor and unfortunately - I don't think she was destined to be an instructor. Her designs were gorgeous and she is obvisouly a master knitter - but her communication skills and patience were not what I would call "teacherly".
Instead of giving us all step by step direction - she instead decided to demonstrate how to make the entrelac squares by knitting them herself and explaining VERY VERY quickly how to do the steps. Out of the entire class - only one woman (who admitted she already knew how to do entrlac) caught on after this demo. The rest of us just kind of picked up our needles and stared at each other. I did finally get the hang of it - but only after she helped me with that darn knitted cast on stitch several times.

I've only been knitting for about 1 year or so - but I think I was one of the more advanced knitters there - there were some women who didn't even know how to pick up stiches and had never knit with more than one color and didn't know you couldn't felt just any kind of yarn but wool :) I felt smart :)

Anyway - Ann was getting very impatient with these poor women and kept yelling at them to not knit more than one square at a time! I just sang my little knitting song to my self (just keep knitting, just keep knitting) and exchanged sarcastic glances with my neighbors! I did learn how to knit entrelac - but it was definitely more of a show than a class!

After the class - I walked around some more and saw the llamas, alpacas and sheep oh my!

Oh and here's a picture of my festival purchases from both days! 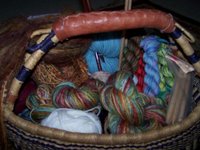 All nestled in a cool wicker basket that I got there too.


Here's a better shot of the beautiful mohair I got - I love it! 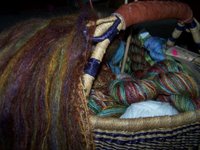 And what Sheep and Wool festival would be complete without some crazy T-shirts - they were everywhere! Here's one of my favorites... 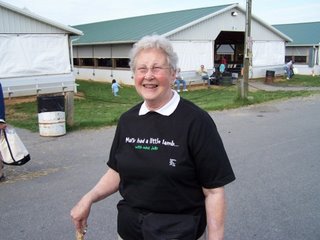 In case you can't read it - it says "Mary had a little lamb... with mint jelly"

OMG....Your two days of purchasing fit into one small basket???? I have a problem. My first hour purchases day one wouldn't fit in that basket (which is very beautiful, I might add!) I am jelous of your restraint.

Sorry to hear of your woes at the entraloc class. At least you weren't alone in your misery.

Wish the crowds wouldn't have kept us apart!!!!!
Holly Anne