I saw Sheep and Wool!

It was utterly amazing. I had no idea that there were so many of us! Knitters could literally take over the world! We have pointy sticks and we know how to use them!

I saw Sheep (and goats and llamas and alpacas...) 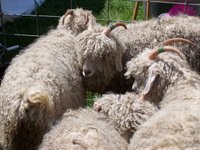 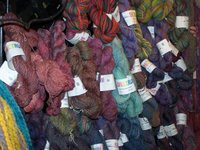 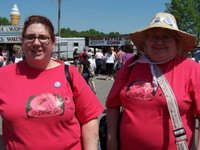 And knitters as far as the eye could see! 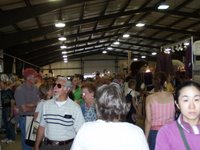 I got up nice and early to head out to the fairgrounds and thank god I did - there was a backup to get in that went on for a mile - and this was at 8:30 in the morning - a half hour before it was even supposed to start!

When i got in - I couldn't beleive how much yarn and wool and spinning equipment there was - it was like a fiber lover's dream come true.

I decided to make my way to the back where the main exhibition hall is located. This is where I was told I would get the best stuff. On my way - I ran into Alice! from my knitting group. It was so nice to see someone I knew! I stopped and talked while in line for t-shirts and souveniers. I couldn't beleive the line for that stuff! There were lines for everything in general - but the line for souveniers must have gone for a mile. 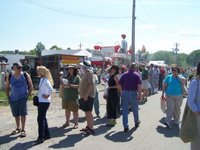 It's like they were giving it away! Anyway - after chatting for a bit - I told her I had to go see the crazy yarn sale I kept hearing about. HollyAnne was supposedly at this crazy sale and I wanted to see it for myself. So - I told her I'd be back and I left for my wool adventure.

I walked into what can only be descibed as mobscene. No sooner had bags of yarn been taken out of boxes than hands reached in from all directions and grabbed grabbed grabbed anything and everything in sight. I found out soon after seeing this why... it was only .12cents an ounce! I had never seen such a wool and yarn loving mob scene! I did what any red blooded american knitter would do. I pushed on in and grabbed the first yarn bag I could see. Yes - I will admit the mob mentality did get the best of me and I grabbed handfuls of the beautiful Koigu yarn and stood in line while the others bustled around me. 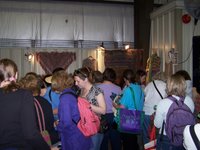 I did manage to convince myself to put back the entire bag and only buy a few skeins of the "Reds" and eneded up spending about $60 on over 20 skeins of the most beautiful yarn. :)

After that extravaganza - I decided I need a break from the impulse buying gene that has somehow found it's way into me and so I went back and found Alice. She was still in pretty much the same spot I left her and I joined her again in time to buy my official Sheep and Wool merchandise. I got a T-shirt, a mouse pad, a pin, a bag and a hat. Gotta love it!

After grabbing our goodies - we headed out in search of more yarn deals. Our mouths were watering as we came upon handpainted and spun wools from around the country. It was truly amazing. A mecca of yarn.

I also ran into Carol from the Celtic Knot and Sarah and also Bonnie from my Thursday knitting circle. It was nice to know I'm not alone in my obsession :)

I ended up with a large stash of yarn to add to my stash, a beautiful handmade basket (perfect for holding the stash), two sets of gorgeous exotic wood needles, some hand made buttons and a cute kid's i-cord maker. (I remember having one of these peg things as a child!)

Overall it was a lovely day! I can't wait for tomorrow when I have my Entrelac felted bag class and then after class - more shopping?!

The place where I a bought my spinning wheel this week went to MSW and every time I called this week I kept getting the messages "getting ready for MSW.... leaving for MSW... etc" I ache to go to MSW. At least I have Taos Wool Festival coming up in the fall. /SP8 Nic

You should have signed up for My Entrelac class at Celtic Knot! If you're having trouble with it, I have a tutorial on my blog :) Good Luck! Looks like you got some beautiful stuff!
--Sarah2 from CK