I work with lots of men. I'm a PeopleSoft developer and as a woman in this industry that's just the way it is. You are outnumbered. At my job it's 3 women to 12 men. 8 of those are Indian men. They don't value women all that highly. I can understand this - I don't agree - but I guess I can undertand it's in their upbringing and culture - blah blah blah - but I don't understand why they feel it's my job to do the administrative crap all the time!

I am probably totally overreacting here - but I am so tired of having to organize lunches, update phone lists and generally make sure the project runs smoothly. If you want make me the secretary - give me a raise! I'm a developer too! I may not be as experienced as the other guys on the team - but come on - I'm in the same exact role. If I asked one of them to make a phone list - it would never happen. But I can be asked to make a list or call a restuarent or print out a spreadsheet for someone and it's ok.

I just got done trying to organize a lunch for a teammate that is leaving. I didn't pick the restuarant (it's Chinese and I hate Chinese food!)- but of couse I now have to plan the entire thing. I tried to call and make the reservation and they are not nice at all and make try to tell me I have to pick from a "set menu". So I show the options to everyone and no one is happy with them. So - I call back and say - no set menu - we are going to order off the regular menu.

So the manager then says - it's too many people - we will have to give them our order ahead of time. great! So - now I have to go around and get everyone's order. I think - ok - these are adults - I can just write an email and request their order by 10 am today. no problem. Wrong! I had to go to each person individually around 9:45 this morning in order to get everyone's choice. Most people hadn't even looked yet. I had sent the email out the day before and there was plenty of time to look and decide.

So - I finally get the orders and then the second after I fax it in - three people say they want to change their order. Too bad - so sad - too late - not gonna happen.

To top it all off - I just tried to call the restaurant to confirm that they got our order and this old lady answers who doesn't speak much english and says " Call back later... I in kitchen... no english..." and hangs up on me.

Ah - the life of an computer programmer. Who knew it would be so full of drama! 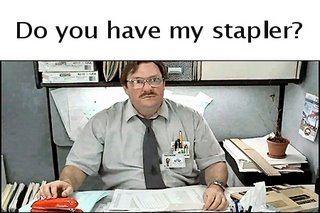 "Ah, um, I I bbelieve you hhave my my stapler?" 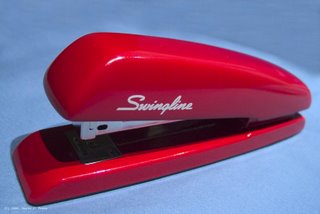 You poor thing! I feel for you, was in that position a few years ago. Got jack of it and told them to do it all themselves, was not in my job description...they eventually got the message, but I left soon after...

Let them do their own little dirty jobs hon, you are far better than that!