Well I managed to get some much needed sleep today and upload all my pictures!! Still not unpacked - but hey - I have my priorities!!!

Hubbo and I had a great time on our cruise. The ship was so huge!!
There was an opening in the middle and you could see all the way down 11 floors! 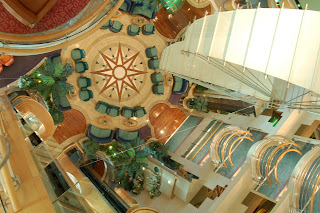 There was also a ton of activities including rock climbing, mini golf, a spa, a gym, a track, two pools, and a kids activity area. 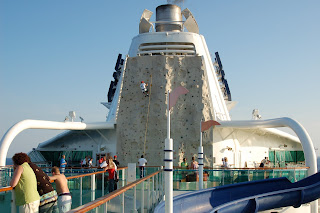 And of course - the main activity for many onboard was the FOOD! And man, was there a lot of it! I don't think you could go a half hour with seeing food or drinks being served somewhere. We tried to restrain ourselves as much as possible... but it was so good to be pampered! On the last night of our cuise - the wait staff and chiefs paraded through the dining room and thanked us for coming - it looked really cool on the dining room steps.... 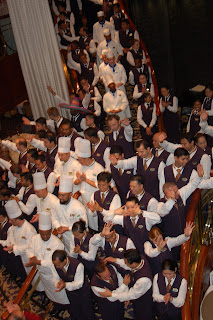 Of course our waiter, Roman, was the best one. He was so handsome! He had a wonderful accent and gorgeous deep dark eyes. He was so smooth - one night - he even hand-fed me souffle! I was in love :) Oh yeah - Hubbo was there too.... (heehee) Don't we look nice all dress up for formal night? I wore the shawl I made and even got some compliments on it! Our first stop after setting sail from Ft. Lauderdale was Key west, and believe it or not - it was my favorite stop!

I loved all the old homes. We took a little tram around the island and stopped at Hemingway's house. It was so beautiful. Lush gardens and cats everywhere! Polydactyl cats (meaning they have extra toes)!! Apparently Hemingway had a cat with 6 toes and many of these cats were descendants of his cat. It looks like they are wearing mittens. Here's a little mosiac of the critters running around the gardens... There were chickens too - Coleen I thought of you!

We also stopped at the Southernmost point. I really don't understand why they put statues of people there. It's just plain silly if you ask me... After Key West - we set sail for Cozumel. Hubbo had made a reservation for me to swim with dolphins at Chankanaab park. I was so excited! BUT... when we got there - they had no record of our reservation and there was no space to make a new reservation. Denied! I was bummed. But it was ok because we found a nice place to sit and we snorkeled instead. It was still a pretty good day :)

I mean after all - I got to sit here and drink Sol all day long! And I even go to meet this Iguana - (yes Nicol - this picture is for you! But this doesn't mean I like iguanas!) Anyway - after Cozumel - we set sail for Cayman Island. I was really looking forward to this stop. My parents had honeymooned there and talked about how great it was all the time. We decided to use the cruise ship this time to make our reservations - because they won't get screwed up that way - right?

We made a reservation to go on a catamaran cruise and then snorkel with the sting rays. Our excursion didn't leave until 2pm - so we decided to get off and explore the beaches a little before our trip. Seven mile beach was beautiful I have to admit: But when we returned to meet up for our tour - we were informed that it was canceled. Canceled?! They waited until now to tell us! I was so mad because it meant we couldn't even make arrangements to go on our own now because the ship was leaving at 6 and this trip was going to bring us directly back when we were done. There was no way we could make it if we went on our own. Denied again!! I couldn't believe our bad luck. I decided no more excursions for me.

Our next stop was Jamaica and I didn't even take a chance with an excursion - we just deicded to go shopping in town. It was crazy! People calling to us to go into their shops and cars driving crazy everywhere! I thought we were going to die on our way back to the shop - the taxi driver was driving all over the road and in the wrong lane at times!!


Even though some of our excursions got messed up - the cuise itself was still great. I think if I ever go on a cruise again - I won't even bother to get off at all! I'll just sit and knit and sip on a cocktail.

Here's our bingo dog with the sock I was working on. Bingo the dog was free when you bought a "Bingo pack". They are ALL about the bingo on cruises. Bingo people can be dangerous - I warn you now! 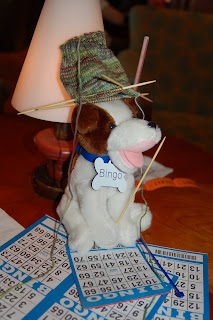 It's great that you had a good time with all that happened. Great shots too Jody!

And a side note, I like to play with kitty feet, and kitties who are polydacs don't like you to play with their feet. It's like they are self conscious about them. My aunt had one that wouldn't even let you LOOK at her feet! Her name was Tootsie, after her extra toesies. :)

I'm so sorry you were denied so many times, but it still looks like you had a great time!

Thanks for the chicken picture!!

What a fabulous time! We were here in the nasty rainy cold and you were living it up! The pics are great :)

Wow. That looks amazing! Sorry for the denial, but it sounds like that would have just pushed you over the edge for too much joy and you wouldn't have come back to us otherwise....

Missed you tonight, but I hear you were down with migraine, and it was very much NOT a migraine friendly zone. Remind us to tell you about it. It will involve interrogation.

Oh sure you wanted to take a picture of some strange iguana but poopoo'd mine!

What a great time you had (in spite of the excursion "mess-ups")! I loved the "hand-feeding" waiter....that was priceless!

Wow, it looks like you had an amazing time!! It sucks that the excursions didn't end up happening, but i'm glad you had fun despite that.

Man I need to go on another cruise!

Wow, you're super lucky. Minus the setbacks, it looks like you had a fabulous time! =D

Gotta love a man that hand feeds you! I can't believe your bad excursion luck.

Oh my gosh, you were here in the Keys! Isn't it great? I love living in Miami for that reason....so close to paradise. There's nothing like the Keys. If you ever come back, let me know and I'll tell you about all the great "off the strip" places you can hit, like the store with the BEST Key Lime pie EVER, and they mail-order!

Oh, and the statues at the Southernmost Point are brand spanking new. When I went last June, they weren't there. Why they put them up, I don't know, but I think it kills the beauty of the place. I have a picture of me and my boyfriend there as well, with no statues.

A few years back I went there and they had amazing scuba/wall diving...your a lucky lady!