The Albuquerque International Balloon Fiesta is in full swing! This morning I watched as literally hundreds of balloons launched from all over the city. Unfortunately I was at work - so I didn't get any good pictures (just a few on my camera phone!) My mom is staying with me here for the weekend - yeah mom! - and she went over to the Fiest park this morning and watched the balloons launch. She said it was an amazing sight!

After work - we both went over to the Fiesta park and saw the "Glowdeo". It's basically a chance to see all the balloons up close while they are on the ground. All the balloon are lit up and "glow". It was gorgeous.

It was also crazy shaped balloon day - meaning all the balloons were different shapes - not just the normal balloon shape.

There was a witch, a wagon, an eagle, bumble bees, chili peppers, the space shuttle, an elephant, a dragon, a frog, noah's arc, Jesus on a cloud, a turtle, crazy monsters, a cat, a penquin, a scarecrow, a pirate, and many many other amazing balloons. It was cool to see them getting inflated with the fire from the gas tanks. 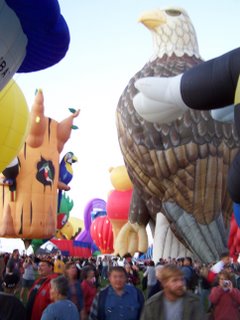 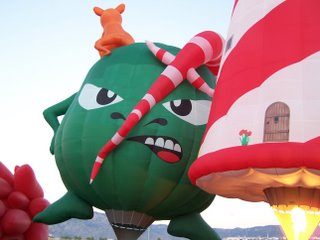 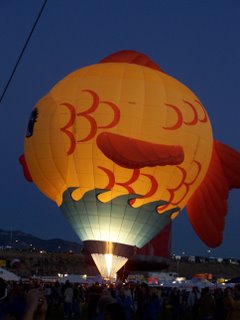 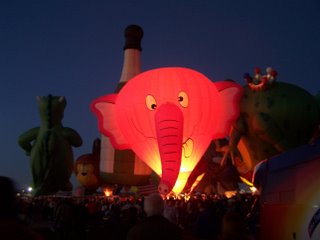 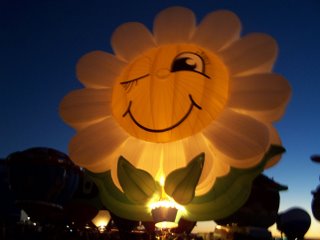 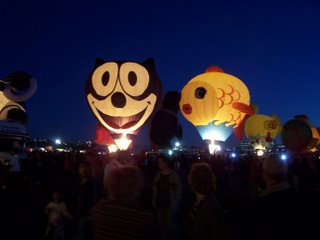 There was also a lot of great food and we sampled frito pie, chicken fajitas, and mini cinnamon rolls. I really would have loved to get some Native American Fry bread - but the line was so long! Maybe next time.

After the balloons - they set off a wonderful fireworks show. It was a grand evening!
Posted by Jody at 10:47 PM

Oh my gosh, those balloons are beautiful! I love the flower one!!!

mmmmm frito pie. I think my favorite is the chile ristra, it's just so appropriate ya know? No matter how long you live here you never lose the wonder of looking at all the balloons floating up in the sky. Missed you on Tuesday!

Me with a pouty face:
I wish I could be there to see them.
Thanks for the set up for science class. I've been explaining to Frick & Frack the how's and why's of hot air balloons all morning.
Tell Mom I said Hi!

congrats, you and your mom are now honorary albuquerquians.