Last Saturday John and I went to Punkin Chunkin in Delaware with some friends. This was the first (and probably the last) time I've gone to this event and let me tell ya - it was quite an experience!

Now I don't normally mind long car rides. We all have our knitting after all - right? But when you sit in traffic at a virtual stand still for 3 and half hours waiting to park in a corn field to see pumpkins fly through the air - you get a little annoyed...

We did finally get there and I have never, ever felt more like a Yankee in all my life. I mean we were in Delaware - but there were more Confederate flag flying, red-neck, farmer, nerds than I've ever seen in my life! Everything had confederate flags on it - the hats (more about this later), t-shirts, blankets, everything! 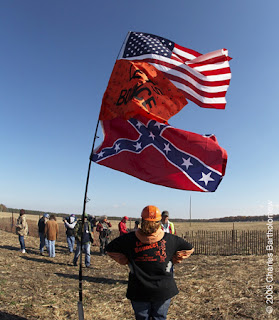 Am I wrong? Isn't Delaware a northern state? Maybe I need a new map.... There were people tailgating, playing football, drinking.... alot, eating, and generally milling around - while all around you cannons and catapults are launching pumpkins into the air.


It was also freezing!! Here's a picture of John bundled up. It was so cold that I really debated with myself for quite a while over whether ot not to buy hat..... a confederate flag hat that is.... It was the only hat I could find. I really, really didn't want to buy that hat. But was so cold!!!

Luckily - I was saved by my friend Tara, who found these instead. Aren't we cute hat twins:) We walked around a bit to try to get the feeling back in our legs. They had an entire line of these huge air cannons. I thought it was genius that there were some built out of a school bus. I guess you use whatever you have and make it work! I mean how else would you get that cannon there? This medieval looking thing caught my eye. It is called Yankee Seige. I was definitely feeling like a yankee at this point anyway - so I was intrigued. I stopped to watch their attempt. They used white pumpkins - I guess they are supposed to be "better" for chunkin. You can see one of the crew setting the pumpkin in place - it's that volleyball looking thing he's holding! and the launch! (if you look closely - you can actually see the pumpkin about to be swung.) 
We did manage to have some fun... here's John and our friend Tim getting fresh with a mannequin... It was strangely fun, in an "I can't feel my fingers and I'm pretty sure I'll find corn husks stuck to me for the next week" way... :)

OMG! You went to Punkin Chunkin! I am from Delaware and have never been. The physics club or something in my high school built a contraption for chunkin' every year.

Now, as for whether Delaware is a northern state...yes and no.

ahem... and people have snarky comments about knitting being a waste of time? 'nough said...

I cant believe you went to that!!

now that looks like an interesting time!!! i had a friend that went to that about 7 years ago and described it the same way....all those confederates - pretty strange up that far!!

I've heard it's nothing but an excuse for a drunken tailgate weekend, but the confederate thing is a new one for me.

Yeah, to follow up on what Danielle said, Slower Lower is the same or lower lattitude than Baltimore, so it's northern only in Civil War standards. Delaware is basically two regions; suburb of Wilmington, or Slower Lower. I lived, and still have relatives, in Slower Lower, and it's very southern in its culture.

Punkin Chunkin started in Millsboro DE, and is now a global event. They're very proud of that there!