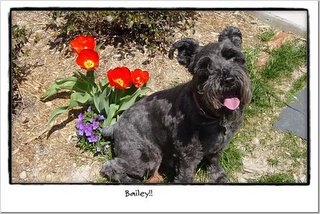 My dog Bailey had the worst day today! It was actually a miracle that I even found him. I had left for the day - took the dogs out - fed them - got in the car and was about to pull out of the driveway when my cell phone rang. My friend Sue needed me to enter her hours online. I had forgotten to enter my hours too (doh!) so I turned off the car and went back inside.

When I got back in - I saw Bailey sitting on the rug licking his back paw. He limped over to me when I called him. I took his foot in my hands and blood was everywhere. I tried to see his paw - but he screamed and tgried to bite my hand. I finally was able to see enough of his paw - and found a nail hanging by a thread - and it fell off in my hand. Poor guy!

Well - I immediately scooped him up and got a paper towel and tried to stop the bleeding. I called John and then the vet and took off to get him fixed up.

He now has his foot wrapped up and is limping around on three legs. I just hope he gets better soon!